Managing Editor Dan Miller writes...
"The article we release each week, from June to September 2021, will correspond to
the band's activities during the exact same week from fifty years ago in 1971."

My Photos from the 1972 Country Gentlemen Festival

BG45 toured the States in 71 & 72. The members who came in 71 were my brother Josh, Watanabe brothers (Toshio & Sab), Liao (Ryo) and me. Mr. Lee who plays guitar and sings, was also the original member but he could not come because he was studying in Taiwan in 71. After the 3 month tour in 71, Josh and I planned another tour in 72 but Toshio, Sab and Liao decided to stay home because having a permanent full time job was more important than a summer job. Considering the fact that working for a same company for 30-40 years was normal back then, it is understandable even though they really enjoyed the tour. On the other hand, Josh and I wanted to take another chance so we recruited new members (Kouji 'Kenny' Takada on fiddle, 'Bobby' Kurokawa on banjo & Takao 'Joe' Koba on bass) during the winter of 71-72 and this is the band you saw at the Country Gentlemen's festival in 72.

The rest of my 1972 Country Gentlemen Festival photos

Courtesy Michael Daves, who received the photos from Jody Logan
Michael and Akira noticed "To Peggy and Tex" is written by Akira in Japanese at the top.

The Bluegrass 45 had a wonderful time in our hometown of Kobe last night with all six original members.
Next year we will be celebrating our 50th anniversary with a new CD, a documentary movie and a tour both in Japan & US.*
- Akira Otsuka, November 2016
*[See the January 2018 Bluegrass Today article below.] 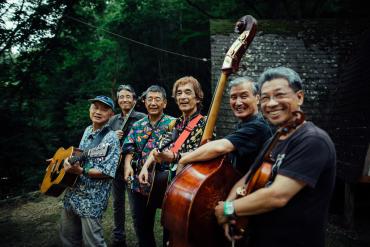 After fighting cancer for almost three years Saburo "Sab" "Watanabe" Inoue passed away yesterday.
He played banjo with the Bluegrass 45 for 53 years and has been publishing MoonShiner magazine
(the only monthly Bluegrass magazine in Japan) for 37 years. It received a Distinguished Achievement Award
from International Bluegrass Music Association just two months ago. He also produced Tony Rice's first LP
in 1973, he and his brother, Toshio Watanabe, started Takarazuka Bluegrass Festival in 1972 -
they celebrated their 48th this past August.
RIP, Sab.
12/3/1949 - 11/22/2019
- Akira Otsuka, November 22, 2019